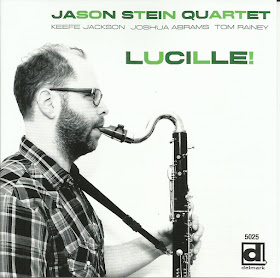 I'd like to say that Lucille features that same-named Little Richard song as the title track. Jason Stein's bass clarinet could do some great intervallic leaps to recreate the rock and roll pianist's phrasing, which turned that name into a three-syllable yelp. Keefe Jackson could burn it up, blowing the walking bass line on his contrabass clarinet. But let's be realistic. As someone who has an affection for that song largely because I heard it before I could read (the version on Okeh, fyi), I'm probably the only person who would really like to hear Stein's take on it.

Lucille! (named for Stein's daughter, in fact) revisits the lineup of his solid 2011 Delmark album The Story This Time. Jackson returns, playing tenor saxophone most of the time, with a couple songs featuring his large clarinet. Joshua Abrams is also back again on bass, but Tom Rainey handles drum duties previously covered by Frank Rosaly. It also revisits some composers that Stein also covered on the previous album - Lennie Tristano (and his student Warne Marsh) and Thelonious Monk. The quartet also covers a Charlie Parker piece and one by modern bassist Robert Hurst. Stein composed the remaining three tracks.

Make no mistake, this quartet's tenor-and-bass-clarinet pairing has its own unique sound. But the rhythm section's swinging freedom in Marsh's "Marshmellow," followed by the entrance of those horns, still evokes the bright moments of Ornette Coleman's earliest quartets. Rainey throws in some off-center accents that put the 4/4 concept in jeopardy, but Stein and Jackson plant it down easily. Tristano's "Wow" is marked by some rugged terrain which they peel off with ease, Rainey joining in to make it double-time. Although Stein can make his instrument (which he plays exclusively) wail and squeal, Lucille! and "Wow" in particular reveal how skilled he can be at laying out an expansive, melodic solo. He and Jackson stretch out simultaneously but never get in the other one's way. When they return to the closing theme right on the mark, it speaks a great deal about the rapport between them.

Jackson utilized the contrabass clarinet for a Monk tune on The Story This Time and does again for a version of "Little Rootie Tootie" that begins with a blast of free squonk. Returning to this horn arrangement for bop doesn't sound like a formula but the quartet misses some of the composition's contours by taking the tempo just a little too briskly. Charlie Parker's "Dexterity" comes off stronger, taking the melody into the sub-basement but keeping the momentum in flight.

The bass clarinetist's originals bring some of the strongest variety to the set. Jackson sits out on "I Know You Were,"where the trio creates a rich tone poem that builds from the bowed bass. Stein's full personality is on display here, running up and down the instrument, his accents making all the difference. While players like David Murray and Eric Dolphy to some extent would add some percussive slap-tongued moments to a solo, Stein is all about exploring the possibilities of melody. It's sometimes hard to get a handle on "Halls and Rooms" in terms of time, which appears to shift frequently. But this approach puts the focus on the reed solos, rather than losing clarity. Jackson contributes an extremely rich solo, combining his crisp tone with a rugged imagination, which Rainey and Abrams follow.